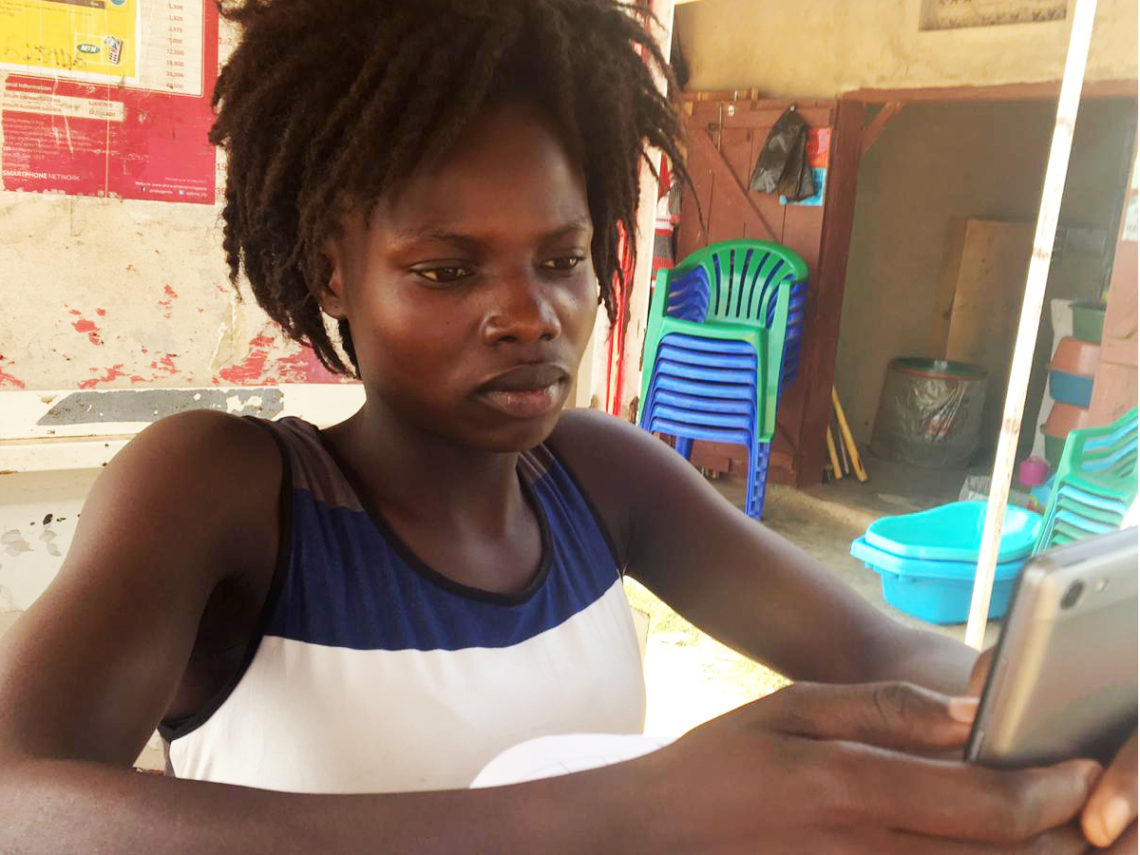 Denise, a refugee in Bidi Bidi, Uganda reviews a mobile money app on her phone.

The Bidi Bidi refugee camp, in northwestern Uganda, is the largest refugee settlement in the country, and the second-largest refugee camp in the world, hosting 220,000 refugees who have fled the devastation and humanitarian crisis of the protracted civil war in South Sudan. In contrast to long-established refugee settlements elsewhere in the country, the inhabitants of Bidi Bidi are newcomers: all of them have arrived since the 2016 “July Crisis” in South Sudan.

Because of the long-term stability, favorable policy and social environment, and freedom of movement in Uganda, the majority of refugees in more established camps are either already engaging in small businesses or would like to start one (a recent World Bank study cited that 72 percent of refugees are operating some sort of micro or agri-business.) But at Bidi Bidi, the relationships and arrangements among people that create an active economy have not had time to develop, and economic activity remains low. These refugees arrived with literally just the clothes on their back and the few assets they could carry, and are to a greater extent than most refugees in Uganda, still struggling to establish themselves and supplement the limited support NGOs and the UN can provide.

However, there is a potential game-changer: mobile phones and mobile money are widely available, and they hold enormous potential for generating economic activity. Grameen Foundation is working with GSMA (the association of mobile network operators) to develop ways to increase financial inclusion among the refugees. In my visit to Bidi Bidi to consider how mobile money could help kick start the camp economy activity, I found many possibilities.

The challenge is to make it easier for people to make payments. Right now, many people receive transfers from abroad and from relief agencies via mobile money. To use this money for purchases, they either need to find an agent who can cash it out or a merchant who accepts mobile payments. Both are in extremely short supply in Bidi Bidi. Currently, when refugees receive transfers from abroad, or from relief agencies, it can take up to a week to find an agent with liquidity. The camp has only 17 agents for over 200,000 people. To reach the ideal penetration ratio of 1,000 to 1 it would need ten times as many agents.

Our work has shown that a focus on female agents will pay off, especially because a majority of the refugees are in women-headed families. Increasing the number of agents cannot be done all at once, however. Currently, agents report an average of 20-30 transactions per day, which does not suggest an overwhelming demand. The pace of recruitment of new agents would need to track the development of the payments and transfer ecosystem within the camps.

Another supporting element for creating an active payment ecosystem is to attract a “super agent,” such as a microfinance institution (MFI) or bank that can help agents and merchants balance their liquidity, an essential function. One possibility is RUFI, a unique MFI founded by South Sudanese refugees in 2009 and working on both sides of the South Sudan-Uganda border, and the only microfinance institution serving refugees in Bidi Bidi. RUFI is also an agent for Centenary Bank, offering savings and other services. Currently, RUFI’s nearest office is over 30 kilometers away, a significant distance barrier for refugees. By locating in Bidi Bidi and becoming a super agent for mobile money, RUFI could not only help manage agent liquidity but it could also get to know agents and merchants that could become credit clients, and move its own credit and savings transactions to digital form. This would position it well to develop a loan product to help female entrepreneurs finance the capital needed to become agents.

Reports by UNCDF, DCA, and Platform for Inclusive Finance indicate that informal savings groups are active in Bidi Bidi settlement, though estimates range widely regarding how many adults participate (from 11 to 49 percent, depending on the report). Working with savings groups could be an effective way to increase digital financial literacy among refugees, increasing their comfort with digital payments. One of the appeals of digital money is its security, and savings groups may be looking for ways to secure their pooled resources, given security issues within the settlement. Encouraging savings groups and their members to use mobile money would help develop the market for mobile money which in turn is needed to support an agent network.

With steps like these, the economy can slowly begin to rev up, providing benefits to all the residents of Bidi Bidi.